It has now become common for one to come across a post on different social media platforms with the title Wordle accompanied by a specific figure and what appears to be a strange-looking yellow, green and black graph.

This growing phenomenon is courtesy of a puzzle known as Wordle created by Brooklyn-based software engineer Josh Wardle in October 2021.

The game initially created for Wardle and his partner Ms. Palak Shah has now been purchased by the New York Times (NYT) Company. According to the NYT, the game has been acquired for an undisclosed price in the “low seven figures.”

Read: Piecing the Puzzle of African Integration: The Successes and exponential potential

This adds to the publications growing portfolio of word games including The Crossword, The Mini, and Spelling Bee.

As of December 2021, The NYT had over one million games subscriptions. The firm added that its games were played more than 500 million in 2021.

The New York Times Company says Wordle will be free to play for new and existing players for the time being. The company also says no changes will be made to its gameplay as it moves to The New York Times.

“As The Times looks to entertain more solvers with puzzles every day — especially during these anxious times — we’re thrilled to announce that we’ve acquired Wordle, the stimulating and wildly popular daily word game that has become a cultural phenomenon,” The New York Times Company wrote in a press release.

Wardle released the game back in October 2021 and since then, the game has exploded in popularity.

“I am incredibly pleased to announce that I’ve reached an agreement with The New York Times for them to take over running Wordle going forward,” Wardle said in a tweet. 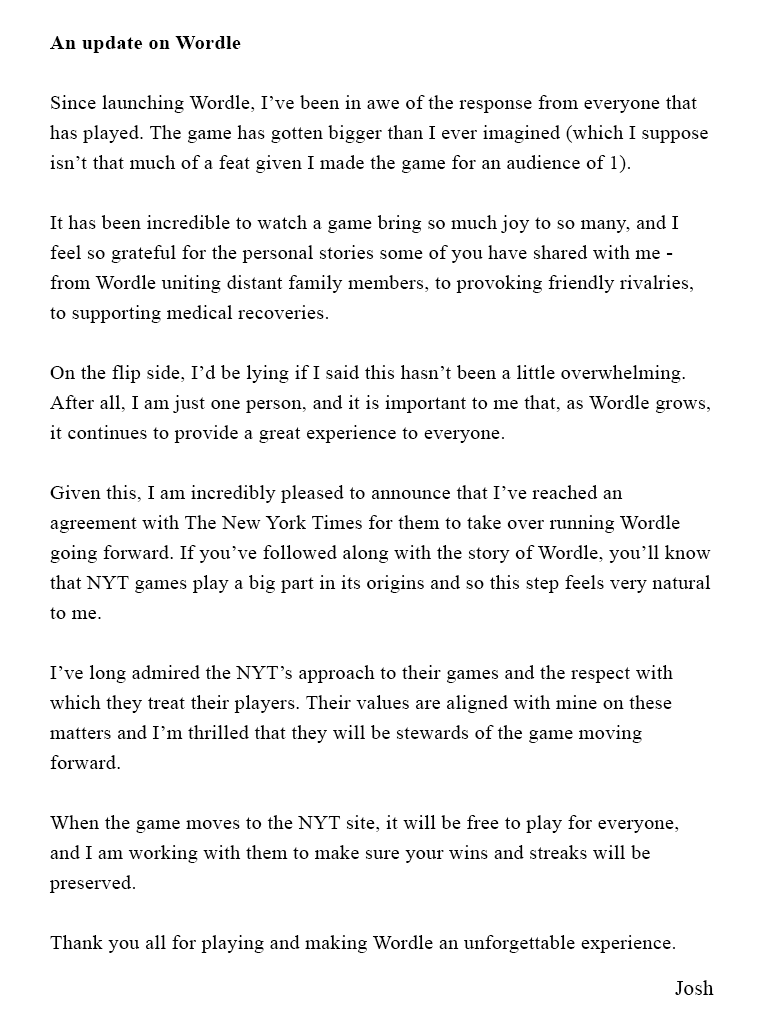 “If you’ve followed along with the story of Wordle, you’ll know that NYT games play a big part in its origins and so this step feels very natural to me. When the game moves to the NYT site, it will be free to play for everyone, and I am working with them to make sure your wins and streaks will be preserved.”

Read: The top 5 most popular destinations in Kenya

He added that the game has gotten bigger than he ever imagined, but that its popularity has also been overwhelming. Wardle outlined that he has admired The New York Times’ approach to its games and that the company’s values align with his own.

During a time when the world was grappling with the negative impacts of the Covid-19 pandemic, Josh Wardle figured out a way to lighten up the mood for him and his partner.

The Brooklyn-based software engineer knew his partner loved word games, so he created a guessing game for just the two of them. As a play on his last name, he named it Wordle.

Wardle and his partner played the game for months before it rapidly became an obsession in his family’s WhatsApp group once he introduced it to relatives.

The once-a-day game invites players to guess a five-letter word. After guessing the word, the game tells you whether any of your letters are in the secret word and whether they are in the correct place. You have six tries to get it right.

There are no ads or flashing banners; no windows pop up or ask for money.

Since Wordle was originally built for just Wardle and Shah, the initial design ignored a lot of the growth-hacking features that are virtually expected of games in the current era.

While other games send notifications to your phone hoping you’ll come back throughout the day, Wordle doesn’t want an intense relationship.

“It’s something that encourages you to spend three minutes a day,” Wardle said. “And that’s it. Like, it doesn’t want any more of your time than that.”

Wordle lacked the ability to share results until mid-December. Wardle noticed players sharing their results by typing out a grid of green, yellow, and black emojis, so he built an automated way for players to brag about their successes in a spoiler-free way.

The game has no mobile app. Only one word every 24 hours. No advertising. No registration is required and you can even play it if your internet connection drops.

Kanyali Cynthia is a Kenyan-based financial journalist with key specialisation in data and tech reporting and over eight years of experience.